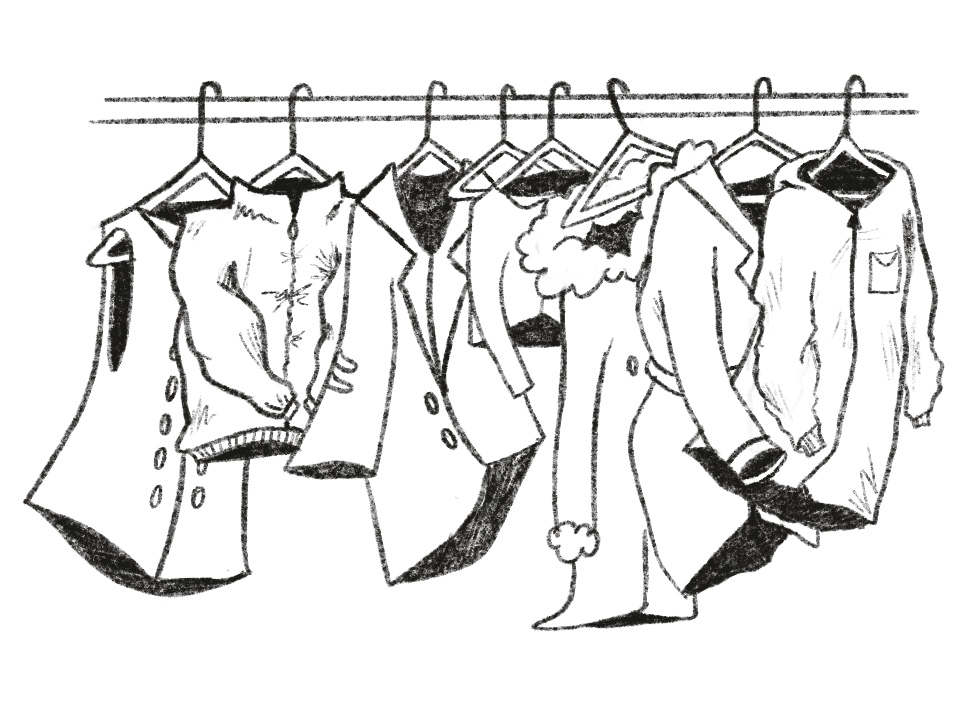 The Wardrobe was a Chatty Place, Waiting for a Windy Day illustration
Drawing

The wardrobe was a chatty place. Coats embraced one another behind the closed doors. The overcoat consoled the windbreaker in the darkness-

“Oh no no no, Windbreaker!” Whispered the overcoat. “You’re the prettiest of us all!”

Windbreaker had never seen daylight, and it wondered if its life would be defined by the hanger.

“Well, you go out almost every day!” The windbreaker complained. “there must be a reason why.”

The pea-coat glanced at the leather jacket with annoyed buttons while the overcoat pondered for a reply.

Frankly, the overcoat agreed. It was made from the finest light blue cashmere and it always gathered attention when it went outside. The overcoat was proud of itself, it had undoubtedly been worn the most so it must also know the most. Its ego was not weakened by the fact that it got hand washed instead of machine washed like the rest of the articles.

“I guess the world just isn’t made for you.” Replied the overcoat.

“That’s not true!” Shouted the gloves from above. “I spend a long time waiting, but when I leave the wardrobe, I am clearly fit for the world. How else would we hold the cup of coffee while it’s snowing?”

“Snowing?!” The bolero cried out. “ It doesn’t snow here. All we care about is looking nice in front of colleagues and posing for photos.” The bolero and the gloves argued for a moment before the wardrobe suddenly opened and a hand reached in. The windbreaker’s zipper sank.

“Don’t worry Windbreaker! Maybe you’ll get donated to the circus.” Gloated the overcoat as its sleeves filled with the warm arms of the owner.

The windbreaker looked down at itself and studied the bright-colored nylon. Its fabric was a different material than everything else and it had wrinkles in the ugliest places.

“Perhaps I do belong at a circus.” The windbreaker sighed. “That would be better than here!” Suddenly, the dark dustiness of the wardrobe became very apparent.

At this point, the raincoat took a stand. It spoke softly as if it were tired with pockets full of crumbs.

“Schiaparelli said that ‘good design is always on the tightrope of bad taste.” Its voice was crinkly, like plastic rubbing on plastic. The other coats thought the raincoat had no sense of fashion either. Yet, it occupied the wardrobe the longest so it developed a sense of wisdom that the trendy styles couldn’t comprehend.

“Thanks.” Replied the windbreaker, offended. The windbreaker was at the opposite end of the wardrobe from the raincoat so it could not see their similarity.

The season changed and the wardrobe doors opened less and less for the coats. The parka had already gone into hibernation so the windbreaker had just about given up. Until one sunny day, when the trees’ branches danced and the air whistled a cheer. Hurried footsteps approached the wardrobe and before any of the coats woke up from their nap the windbreaker had vanished.

A windy day was finally here.