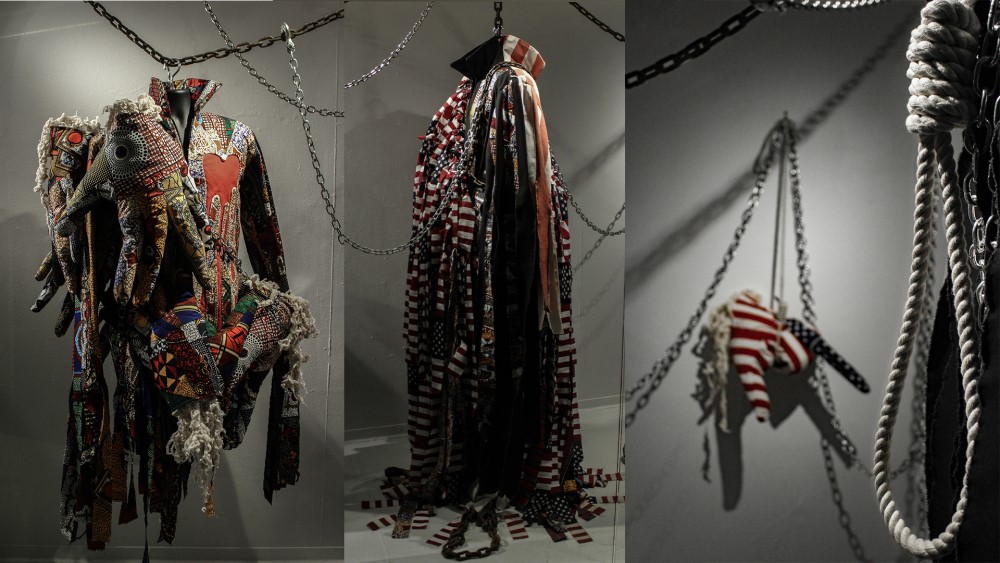 From Left to Right, 2021, Installation
Works shown from left to right: The politician / Suspicious Activity, The voter / The worker, Up Against the Ropes / Death 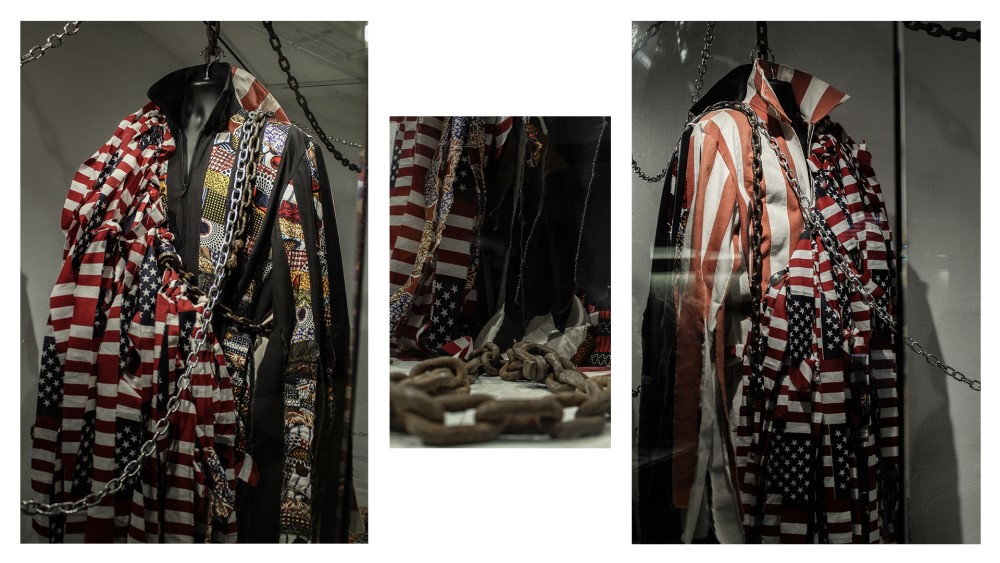 Detail of From Left to Right, 2021, Installation
The voter and The worker back-to-back chained together with the Virginia Creeper 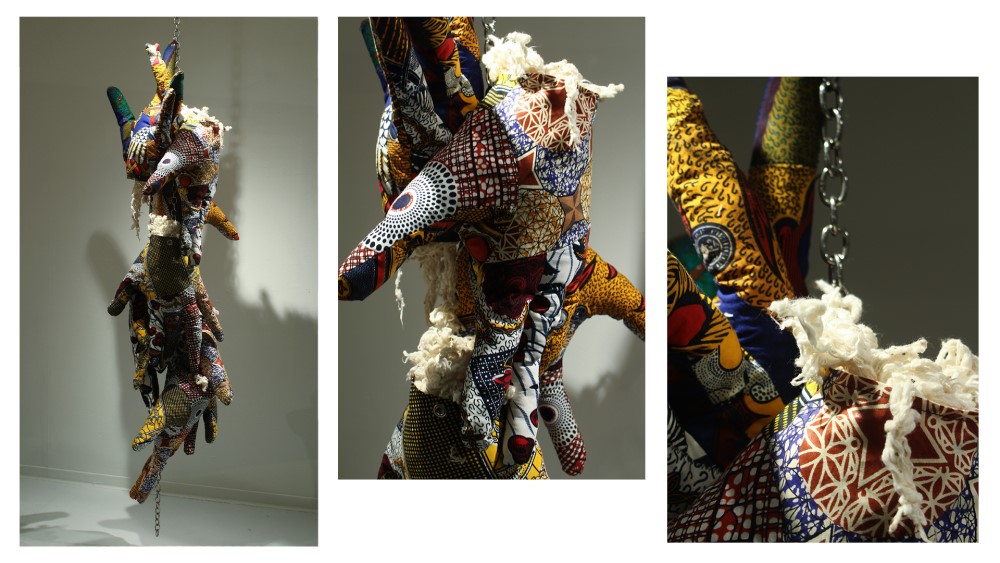 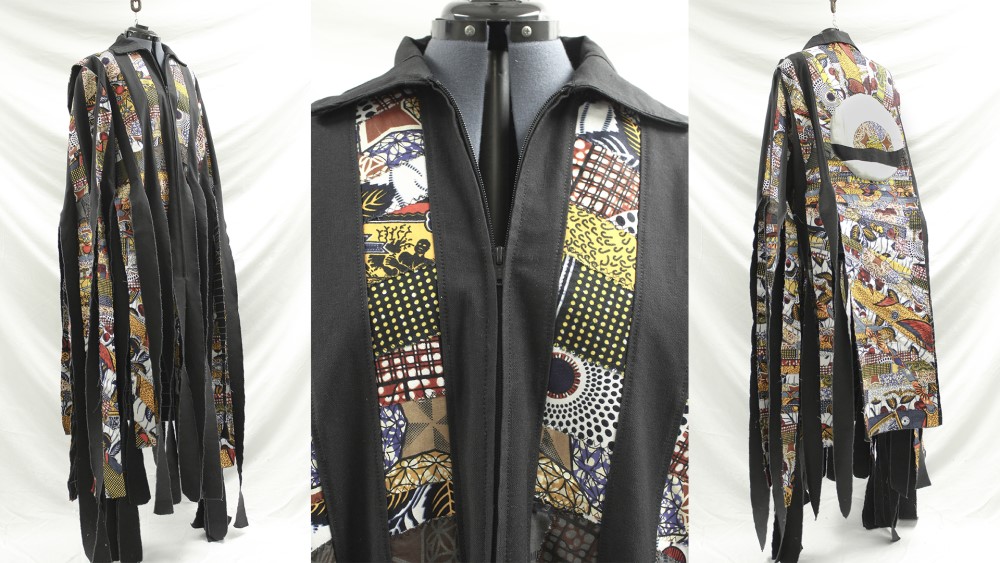 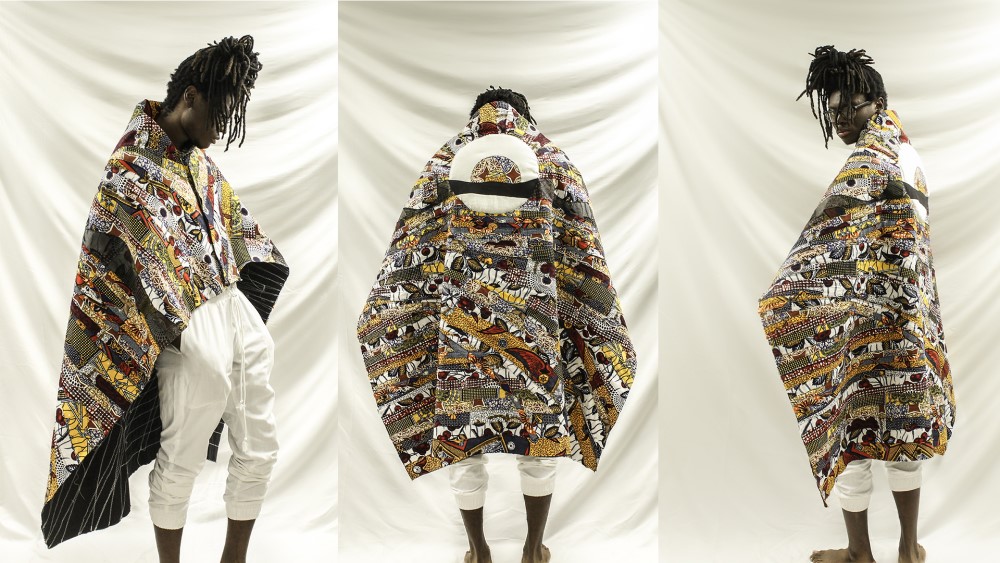 Sunset Back Home #1, 2020, Cotton fabric, linen fabric, and spray paint
This fabric painting was cut into strips to create ‘The voter’ 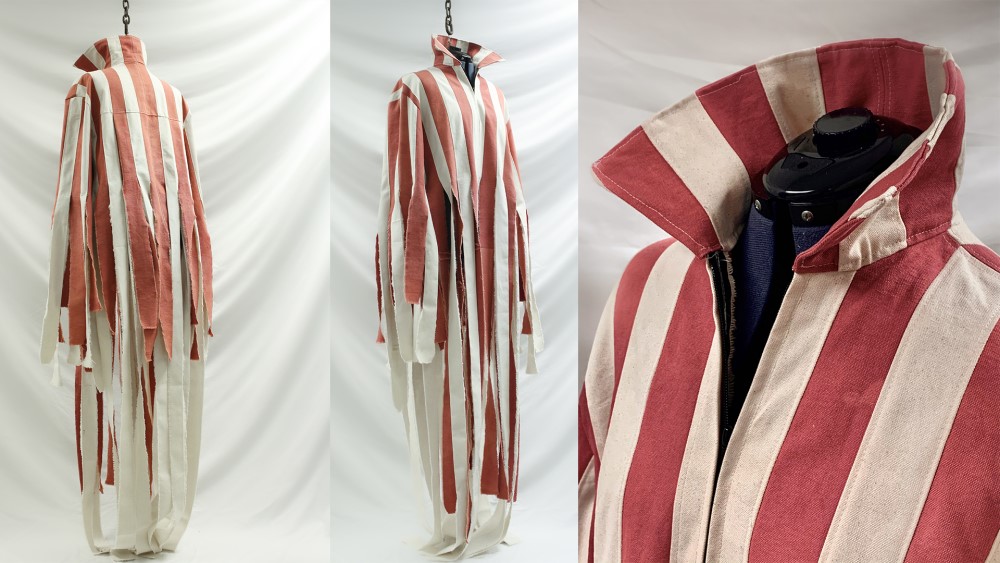 The worker, 2020, Cotton canvas and natural dyes
Madder root and cochineal were used to achieve the pale red color 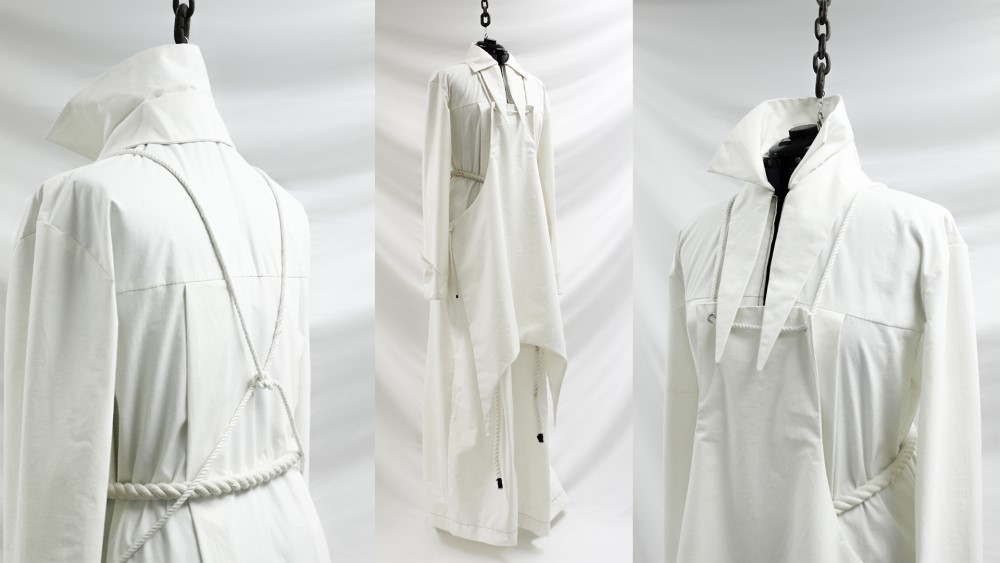 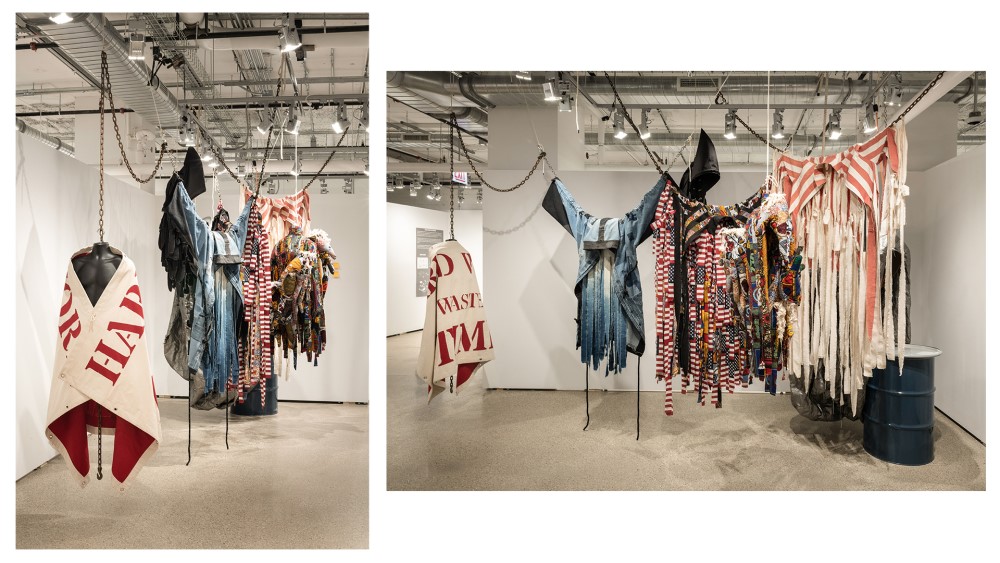 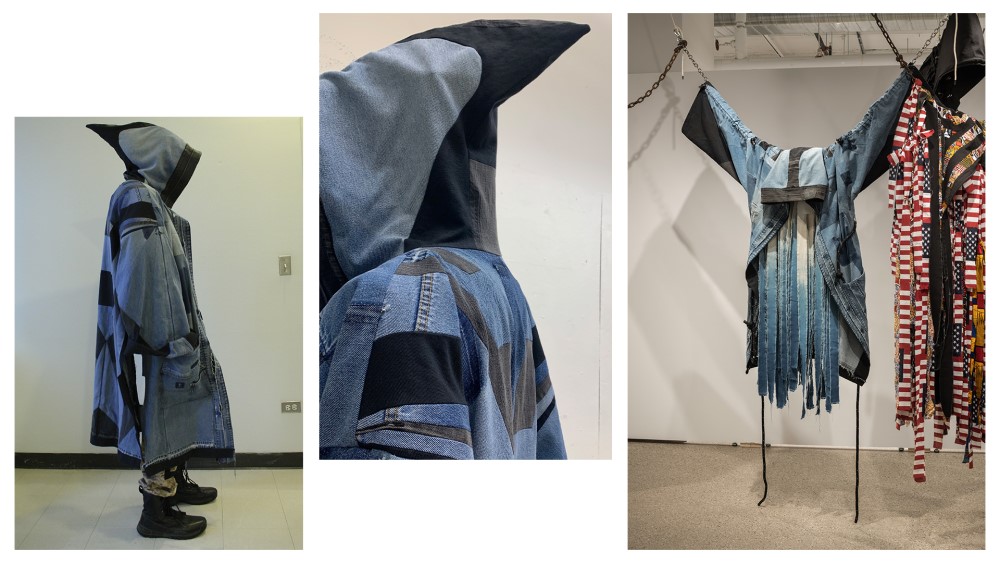 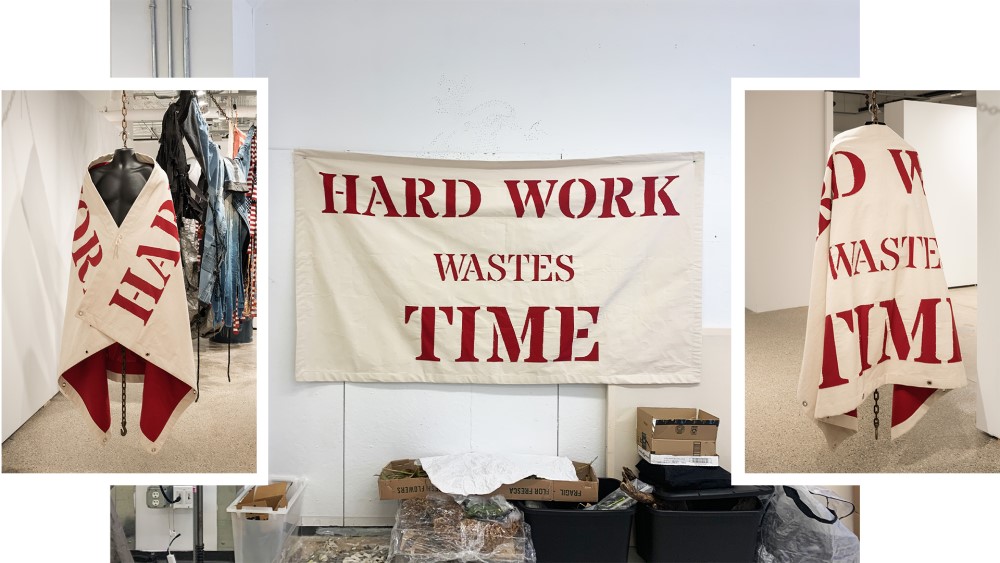 Death Stopped By, Ongoing, Sound, 5 mins.
Death Stopped By is an ongoing digital sound story. Beginning with the murder of George Floyd, twisting and winding through time to the unfavorable verdict of Breonna Taylors murder case, I am documenting the obscure feelings felt when being confronted with the ‘ghost’ of state sanctioned violence and the civil unrest to follow. Where do we go from here?

There are many contradictions that I live within. Traversing and synthesizing those contradictions into a form that makes sense has been my goal since I started my creative practice. So much lies in the space between.

As an African American, I am a walking contradiction. I am not supposed to be here, yet here I am generations removed from a place and an origin that I will never know. Coming to terms with that is hard as so much of our individual American identities are based on our story, our ancestry, or immigration history. There’s an emptiness to this situation of involuntary displacement. There’s also freedom in that emptiness as I am not tied to the past… so I thought.

My world view was effectively shattered May 25th, 2020. This was the day of the murder of a Black American named George Floyd. The elusive ghost of state sanctioned violence and police brutality was caught on camera and went viral worldwide sparking protests and civil unrest in places “where this kind of thing never happens”. Although this is unfortunately a common occurrence, the murder of George Floyd is when it finally dawned on me that I am not safe. I am still tied to the past and to the historical circumstance of this country. It is imperative to know and understand these circumstances. It could save a life; my life. As an artist I couldn’t just sit on these feelings of fear, paranoia, anger, and disappointment. I had to get to work.
The first piece of this collection of objects is titled the ‘Virginia Creeper’. It is made up of the American flag that has been repeatedly printed on synthetic fabric and an old rusty tow chain taken from home. I ripped the woven flag fabric up into strips and tied it to the chain. The piece also features ripped African print fabrics that are choked out by the red and white stripes of the flag. Initially I wanted to make a quilt with the fabrics, but quilts are too soft and comforting for the moment. Ripping, and tying these strips of fabric onto something as cold and heavy as a tow chain made more sense.

The next piece I began to flesh out is titled ‘Suspicious Activity’. This piece is a reaction to the numerous police calls on people of color engaging in “suspicious activity”. As we have seen, when the police are called on an individual or a group of individuals of color, things tend to go south leaving a black body behind. This piece is made up of hands made of African print fabric scraps and stuffed with cotton batting. They are then strung onto a chain to hang lifelessly as if they have been severed from a more complete body.

The three pieces titled ‘The voter’, ‘The worker’, and ‘The politician’ take the form of work shirts all made out of ripped strips of fabric. Both ‘The voter’ and ‘The worker’ could be seen as portraits of myself (or anyone really) within different areas of our society. The majority of the time I am simply a worker trying to make ends meet as my parents have, as my grandparents must have and as everyone around me is, but during an election year, I have become a voter. All of a sudden, my identity, where I come from and how I feel matter so much to the politician with a bleeding heart.

Throughout my final semester here at SAIC, my classmates and I were given the opportunity to install our work into the display window of the Fashion Department. This opportunity was very important to the progression of the work. I began to play with the objects and directly see how they can exist with each other in a space. My first window experience was in collaboration with classmate Ellington Bramwell. Both El and my work confront this violence that we ourselves have the potential to be confronted with as young black men. In ‘Confronting Confrontation’, the stark and muted nature of El’s work contrasts with the bright colors I have been experimenting with. The beams he uses to push up against and eventually break his fragile plaster chest and face molds became abstract and awkward bodies for my garments to dress. Our work literally comes together in the center of the window where I installed the ‘Virginia Creeper’ as a curtain opening up for Els video work titled ‘I am them, they are me’ to be projected onto the wall.

My second window installation is titled ‘From Left to Right’. It is set up in such a way to resemble a group photograph and the title is the caption. I list each character in the display from left to right: ‘The politician’, ‘The voter / The worker’, and finally ‘Death’. There’s a sense of hopelessness in this installment as no matter who you are or what your title is, we are all chained to ‘Death’.

The final installment of this collection of objects will be in SAIC Galleries for the Graduate exhibition from May 3rd to May 19th of 2021. This installment is titled ‘Hands Up’. This is a call back to the protest slogan “Hands up! Don’t shoot!” that rang through the streets of every major U.S. city during the summer of 2020. Each garment has a chain strung through its sleeves and is hung from the ceiling with cotton rope. The way each garment is suspended is reminiscent of someone holding their hands up in surrender. ‘The voter’, ‘The worker’, ‘The politician’, and ‘Death’ are all present. The way they interact with each other and other pieces, such as the ‘Virginia Creeper’, have been switched up again for further exploration.

Other garments are included as well such as ‘Free as a Bird’, ‘Hard Work Wastes Time’, and an untitled concept I am interested in further developing. ‘Free as a Bird’ is an overcoat inspired by the colors of the Indigo Bunting. The shape is derived from an old oversized denim jacket my father gave me. I love the fit of that jacket so much that I made another one out of my family’s old and worn out denim. ‘Hard Work Wastes Time’ is the first of many hand sewn cotton canvas tarps. Finally, the untitled concept made up of a silver heavy duty tarp, and two 55 gallon steel drums, currently exists as a conduit for the sound piece titled ‘Death Stopped By’; a digital sound piece that documents the emotions and the sounds of 2020 and beyond. The piece is ongoing. As the situation we find ourselves in continues to progress, I will continue to add on to the sound piece with new installments and sounds that signify the time.

In conclusion, this body of work is in constant motion. It moves between physical spaces and the objects that make it up converse and interact with each other. The common thread that holds them all together is the materials. I have found it very important to use cotton fabrics, chains and ropes to produce these works as these materials are common to my rural upbringing, but together within the context of the work, the potency and underlying sinister connotations of these materials steal the spotlight.