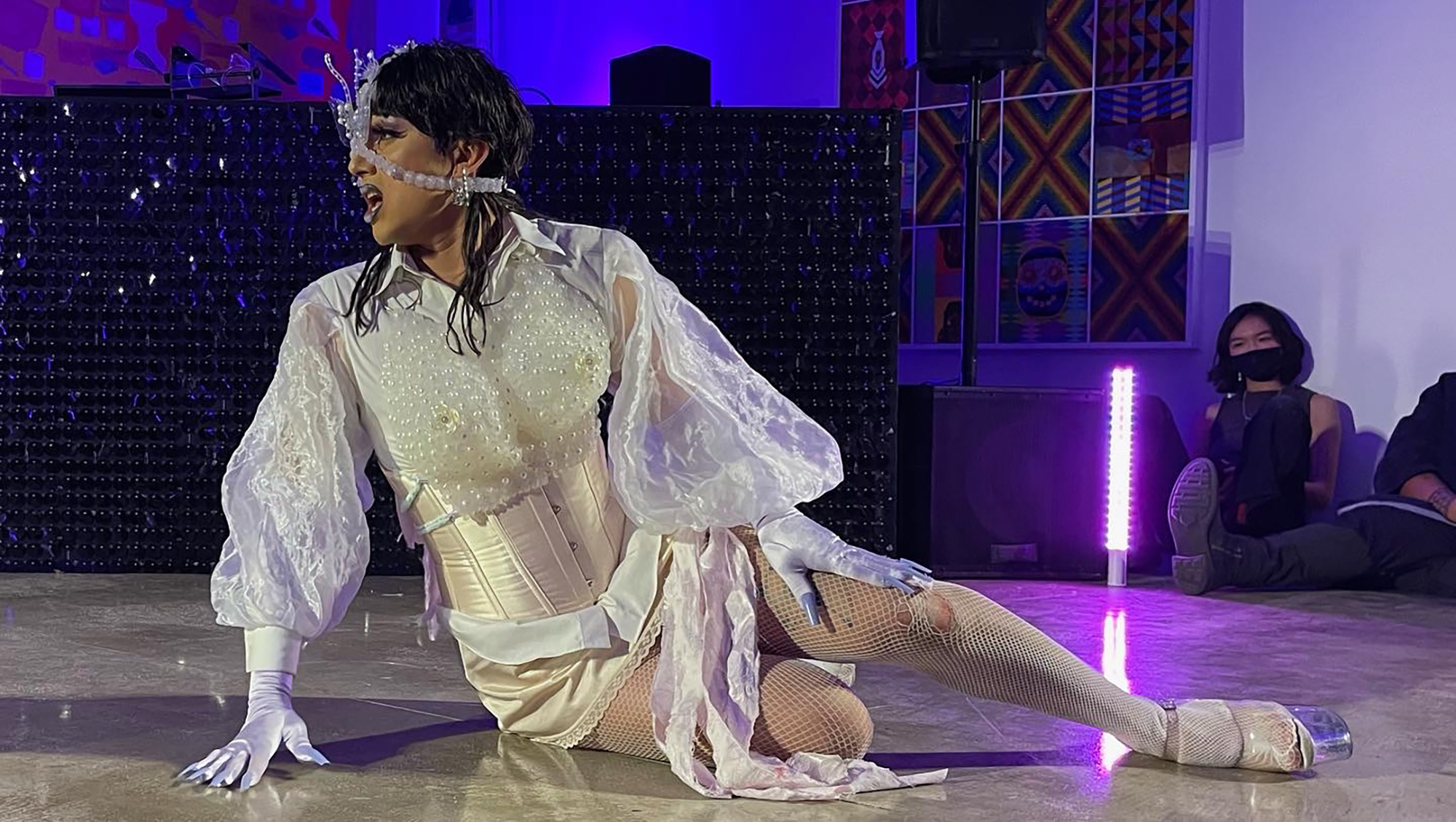 "SEANCE": An Evening of Performances hosted by Jeffrey Gibson and Ále Campos, 2021, Documentation of Ále Campos performing as "Celeste" at Kavi Gupta gallery for "SEANCE" in celebration of Jeffrey Gibson's "BEYOND THE HORIZON," Photo by Mark Jeffrey 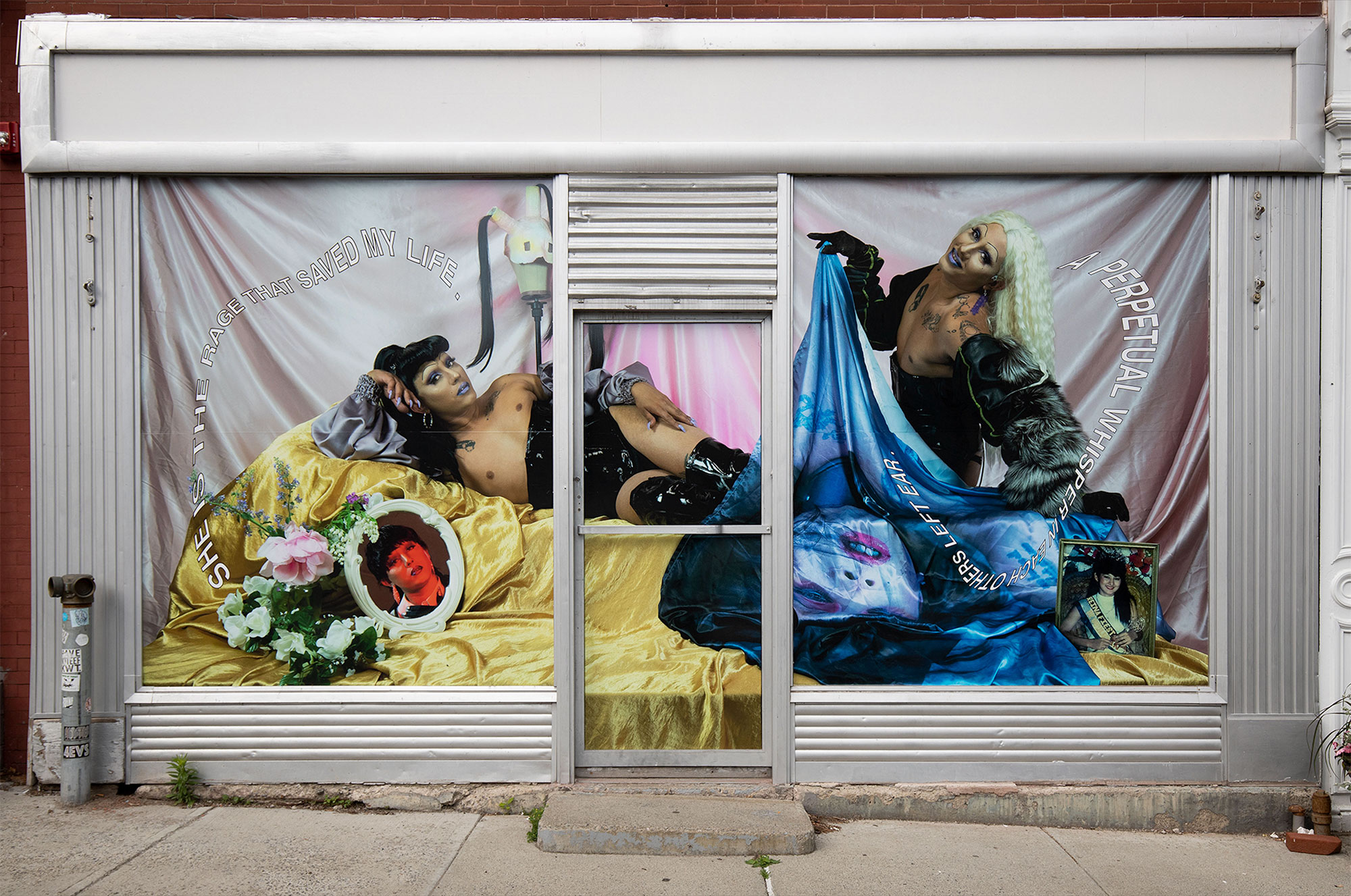 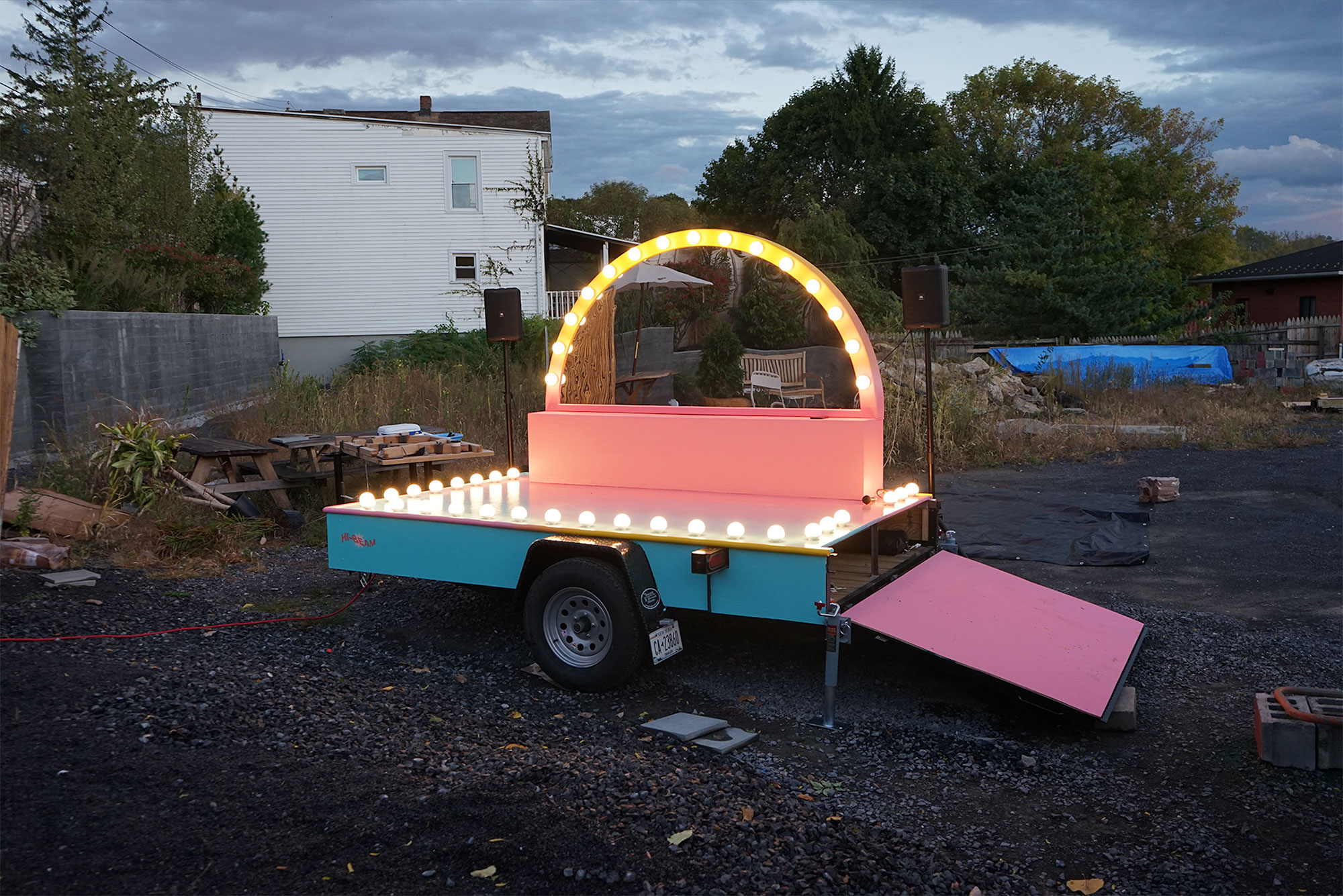 HI-BEAM: Mobile Stage Project, 2020-2021, HI-BEAM is a project funded by the Tourism Board of Hudson, NY. Created in response to the pandemic regulations, HI-BEAM serves as a queer operated platform for a variety of artists and performers to safely share their work in outdoor, accessible settings. 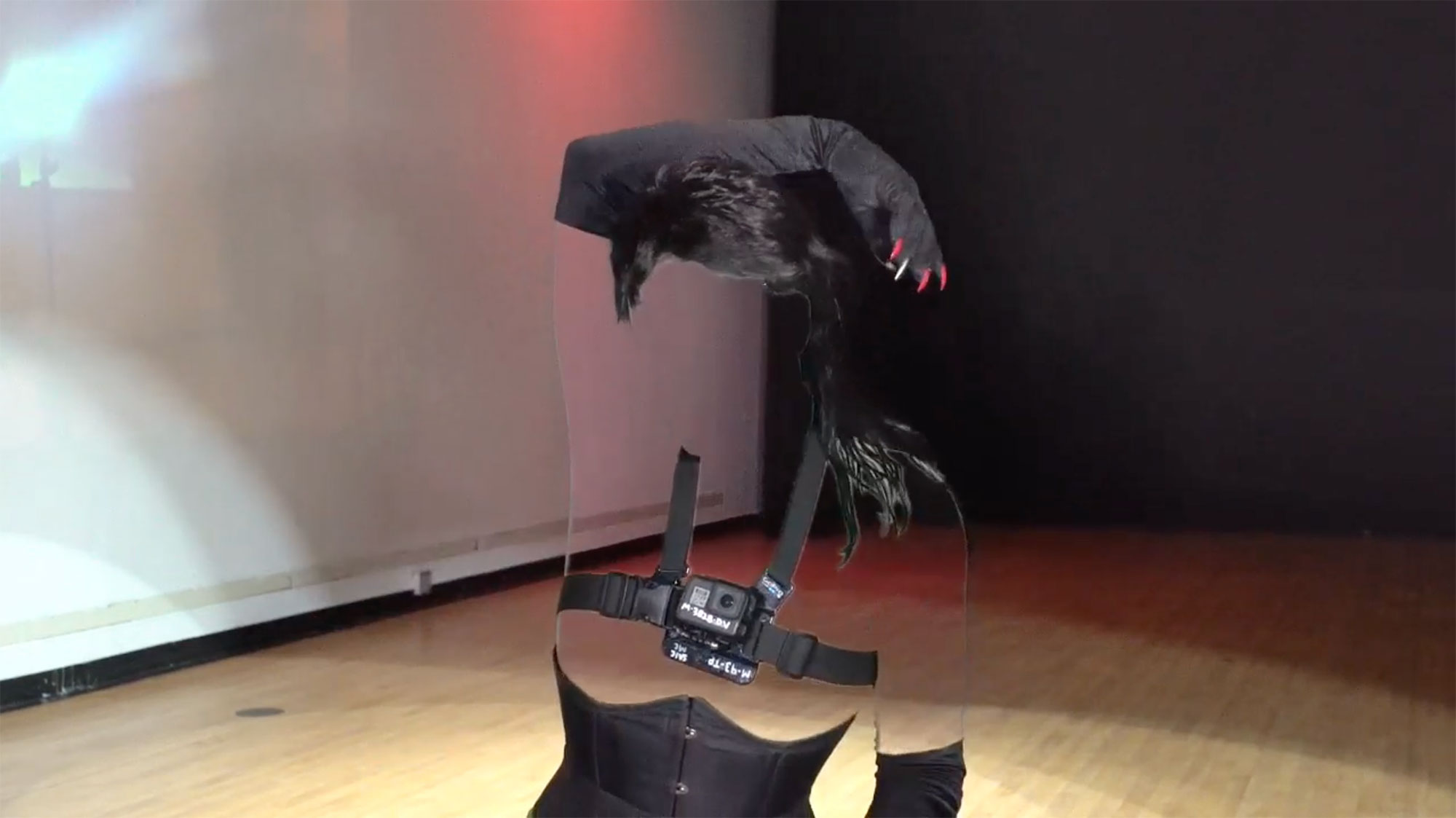 TO DISAPPEAR AND SHAKE THE EARTH ALL THE WHILE: ACT I, 2021, Video still from a Zoom stream during a mediated, multi-channel performance involving green screen technology, virtual streams, and multiple camera perspectives 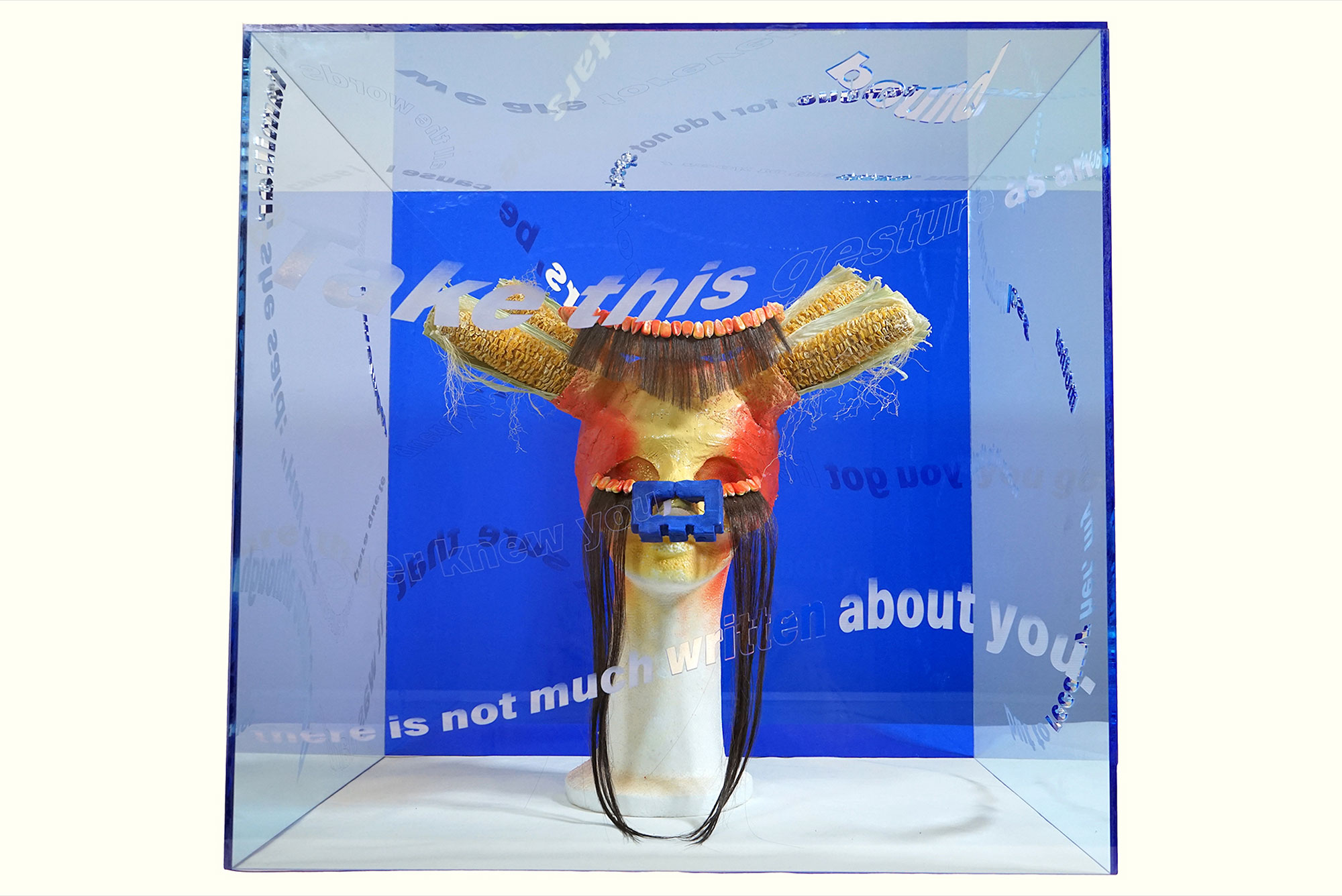 Ále Campos is a multi-disciplinary artist and performer currently based in Chicago, IL. Their body of work is elastic in nature, stretching across a variety of modalities, mediums and presentational formats. In their non-binary approach to making, they generate live performances, which are often processed through the virtual stream and the camera, as well as works encompassing sculpture, text, sound, video and print media

At the core of their studio practice rests a commitment to drag and their persona, Celeste. They carry drag as a form of queer expression and performance with a reverance to its purest origins – the queer underground, the nightlife realm and the communities of the club. In fact, they also work and produce a wide range of happenings and events in this arena. But perhaps most importantly, they’ve located drag as a potent force for shaking the hegemonic forces that govern and bind the social. They implement drag as a tool for handling and re-constructing personal and cultural histories and mythologies for the sake of charting the nebulous aspects of their brown, intersectional identity whilst projecting towards the potential of future selves. They often mine the anecdotal past, extracting material such as texts from their grandparents collection of love poems and images of their mother’s pageant queen days; they maintain a strong belief in that the process of becoming isn’t a linear unfolding path, but rather a winding one that also requires returning to our formative experiences, our lineages, our places of origin. Within this framework they wield elements of queer longing and desire, sometimes even melancholy and love, as catalytic material for manifesting and conjuring alternative worlds and realities. Their fluid state as a maker, between “Ále” and “Celeste”, mirrors their investigations within what it means to move between states of hyper-visiblity and perhaps invisibility, and the inherent sliding scale of vulnerability these states come with, especially as marginalized peoples. At large, this fluidity is reflected across their practice as whole, where they maintain a slipperiness that allows them to create works that destabilize the gaze and skirt the traditional bounds of performance. Drag is a prism through which they challenge us to think about how we witness performance and look at the performer-body.

Their practice is strengthened by their work in carving out spaces for queer community and expression out in the world. They operate as community organizer, curator, programmer, and host as well as performer, with a drive to create platforms that center drag and a variety of queer performance. In the summer of 2021, they brought to life a traveling, mobile stage funded by a grant from the City of Hudson, to host a series of public, curated performance evenings, as well as other local artists and performers. These projects almost always involve large collaborative efforts and are centered in fostering a sense of togetherness, a celebration of queerness in all its shapes and forms, as well as bringing drag to the forefront as a powerful mode of expression and art making for all to participate in.