The Incarceration of a City: Floating Structures of the “In-Between”, 2022, 3D section
The Gaza Strip, Robust infrastructure. Design by Arwa Qalalwa. 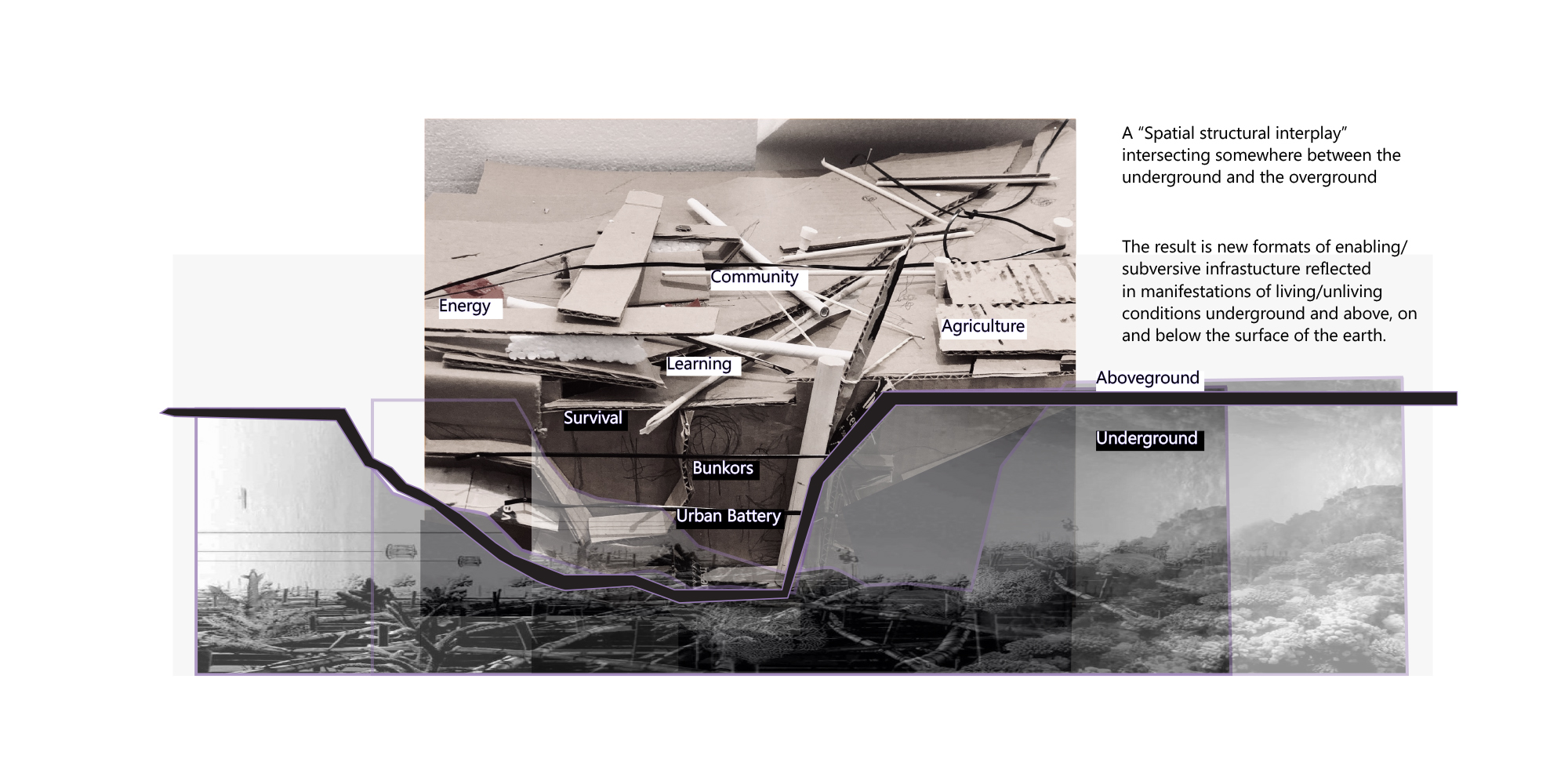 Study Model of Gaza’s Living/Unliving: An Infrastructure of the “In-between”, 2022, Study model
The Gaza Strip, design. Photo by Arwa Qalalwa.

The procedural tectonics of the Gaza Strip Infrastructure, 2022
The Gaza Strip. Design by Arwa Qalalwa. Amid the imposed Israeli incarceration, destruction, and apartheid against Gaza, the project proposes a self-sufficient, robust infrastructure that metamorphosizes and adapts with the city's lifecycle. The system operates on various terrestrial levels. The diagrams above depict the procedural tectonics of how the proposed infrastructure can shift and function between different layers of the earth. The system operates aboveground, underground, and somewhere in the "In-between.” It can also migrate its functions to subterranean levels in times of contingency, ensuring continuity of life activities in which the system can continue to operate and resist regardless of aboveground conditions of Israeli aggressions.

On the Eastern coast of the Mediterranean Sea, there lies a prison unlike any other: a whole territory, a whole people, urbanely imprisoned in a land-sea-air blockade that is consistently a target for bombing strikes, in what is known to be the largest open-air prison in the entire world, the Gaza strip. Gaza’s territorial configuration and character exhibit increasingly complex hybrid and interstitial spatial responses to constant Israeli oppression strategies, which strangle one of the most densely populated territories on earth. As a result of these extreme and deliberate tactics, the very fabric of the physical and cultural context keeps mutating. With a duality of terrestrial and subterranean distortions, Gaza transforms into a perforated city with tunnels beneath, debris and destruction aboveground, and floating forms of Israeli toxic apartheid regimes encircling the entire strip.

The thesis dissects the layers of Israeli colonial oppression in Gaza, considers the temporality of Architecture in light of the continuous destruction, and speculates on new forms of subversive/ enabling Architecture. The project focuses on a contingency node in the Gaza strip that will serve as a prototypical module for other contingency locations in Gaza, intervening with agriculture, water, and the city. By investigating ways of living/unliving for Gazans within the duality of Gaza’s underground and aboveground, the project evolves into a new robust language of infrastructure that exists somewhere in the “in-between.”

The Gaza Strip in Palestine has been subjected to the suffocating Israeli siege since 2007 and has endured four wars since its blockade. The thesis challenges these deliberately constrained settings and proposes an infrastructure that becomes a self-sustaining machine, prolonging life activities and resistance in three terrestrial layers: the aboveground, the underground, and the “in-between”. This results in a new living system that maintains a tendency towards change and transformation, where layers at different levels of the terrain work in response to scenarios of living/unliving for Gazans who face the monuments of siege, oppression, and apartheid.
While this work does not seek to provide final or complete solutions to Gaza’s tissue, it does serve as a statement and a medium for speculating on new design thinking approaches, especially when confronted with extreme and deliberately constrained settings. At the same time, it challenges and exposes Israel’s hybrid layers of apartheid against Palestinians and the Israeli war atrocities in the Gaza strip. This work goes beyond the constraints of typical architectural interventions, particularly amidst unprecedented circumstances that necessitate new ways of thinking about architecture.