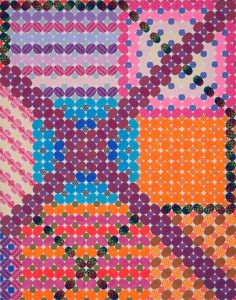 Geoffrey Todd Smith employs seemingly simple structures in his vivid, intensely patterned abstract paintings. Common geometric elements – circles, ellipses, ovals and dots – inhabit a tight grid in visually confounding and colorfully explosive compositions. Given the geometry and precision in his work, Smith’s paintings are often mistaken for digital prints when seen at a distance, yet they are all painted freehand; nothing is taped off. Larger shapes are filled in with gouache or enamel paint; linear elements and patterns are hand-drawn with archival gel pens. Teetering between order and disorder, Smith invites the viewer to consider beauty and dissonance simultaneously.

On Bad at Sports in 2015, artist and critic Kevin B. Blake writes “Geoffrey Todd Smith is a prime example of an artist who uses his practice to induce introspection, which manifests materially as abstract paintings. His titles often reflect his accumulation of shared experience and an insight into the immediacy of his process, while the images conjure a methodology for achieving the internal gaze. His most recent project was executed under a set of rigid parameters that maintained a control of scale, considered material applications, and required an immense dedication of time.”

Smith’s solo shows include Luis de Jesus in Los Angeles; Hyde Park Art Center and the Union League, both in Chicago; Nudashank in Baltimore and he’s been included in group shows at The DePaul Art Museum and Shane Campbell Gallery in Chicago, The Hughes Gallery in Australia, The Green Gallery in Milwaukee, the Illinois State Museum, Charlie James Gallery in Los Angeles, DCKT in NYC, Circuit 12 in Dallas, and Baer Ridgway in San Francisco. His work is in the collections of the The Federal Reserve Bank of Chicago, Hallmark Inc. in Kansas City, Fidelity Investments Corporate Art Collection, the Jager Collection in Amsterdam, Soho House Chicago, the South Bend Art Museum in Indiana and Harper College in Illinois and has been written about in The Seen, New American Paintings, Bad at Sports, art ltd, Juxtapoz, Chicago Tribune, and Chicago Magazine, who called him one of the “rising stars we should be collecting now”. Smith lives and works in Chicago.