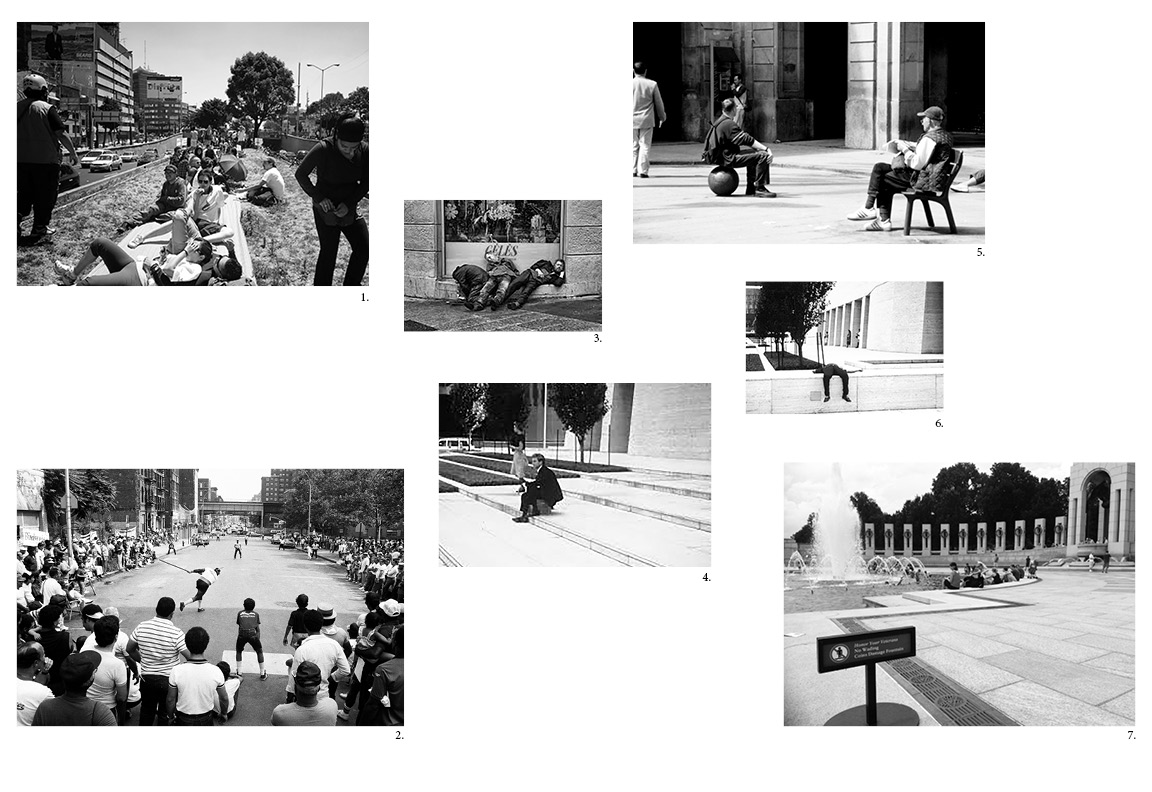 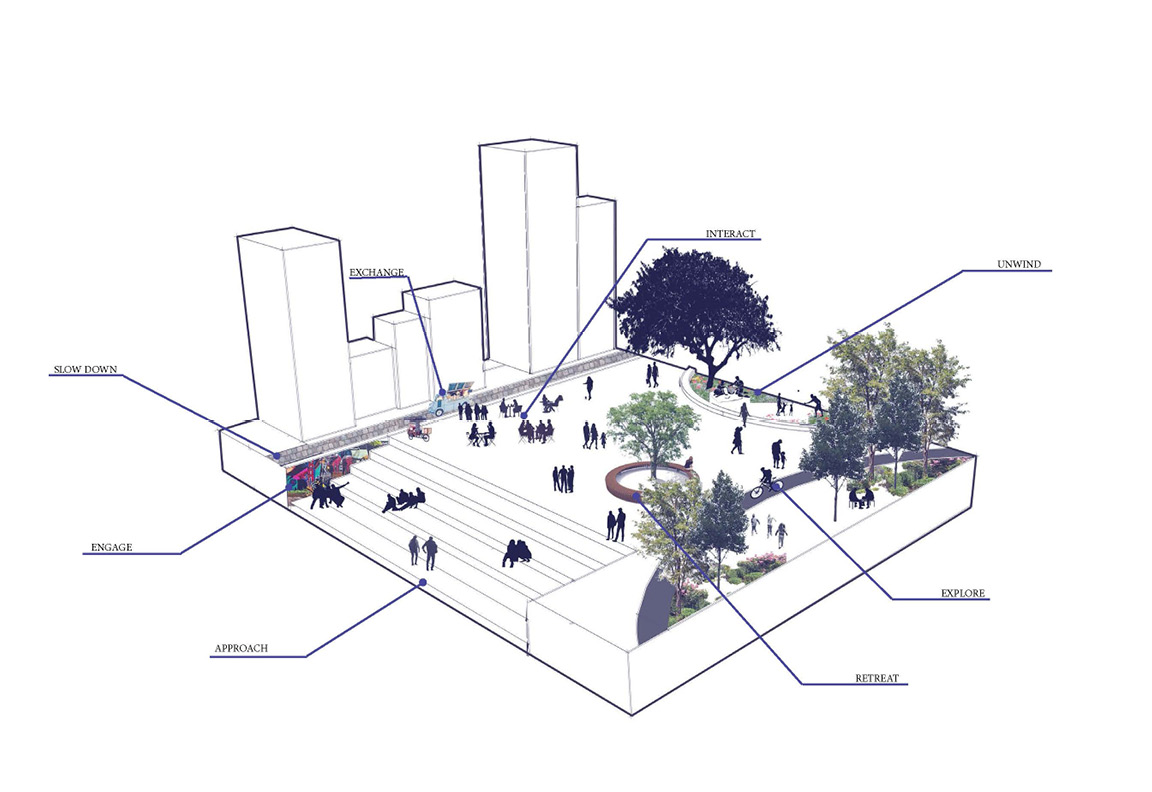 Cues, 2021, Digital print, 16 x 11 in.
Architecture defines space and invites occupation and interaction. The physical elements of architecture suggest how a space is intended to be used and who is supposed to use it. Each specific element conveys a message about the space it forms: Where to sit, where to stand, where to enter, who should enter, where to exit, and what activity to perform where. In an era where racism and discrimination charge American Cities to democratize access and opportunity, what kind of spaces encourage diverse community gatherings? Rethinking existing interiors can reveal the relationship between design and behavior and open new opportunities for the architecture of human experience. Architectural Expressions: The Language of Public Space is a visual dictionary defining a taxonomy of elements aimed at public interpretation, involvement, and interaction. Architectural Expressions: The Language of Public Space focuses on the impact and development of the public realm to create and activate public spaces that foster inclusivity and interactivity building a sense of belonging and community. 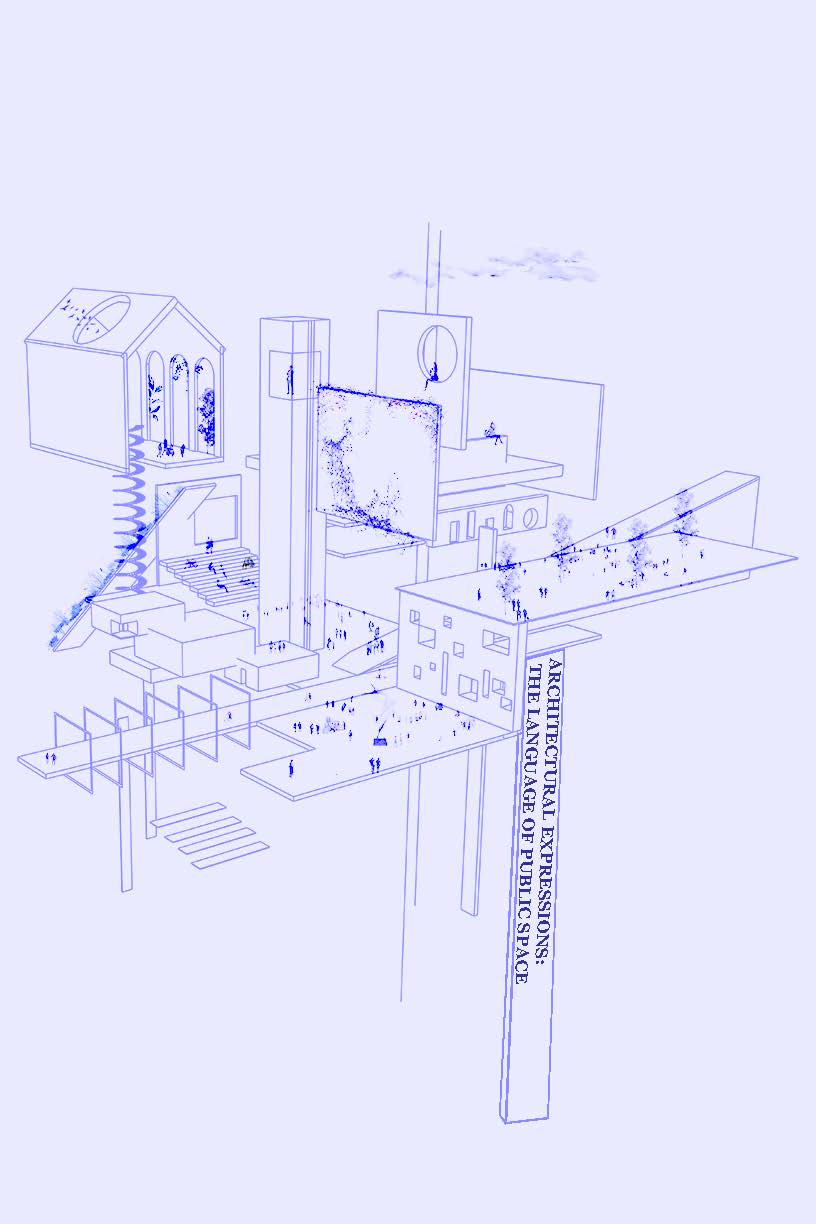 Due to investment restructuring in many American cities over the last 50 years, there has been a loss of truly public spaces and the cultural uses they provide. Open public spaces are transitioning into privately owned semi-public spaces that are visibly public in capacity but not in ownership or accessibility. As municipalities sell and transition ownership to private companies, public space becomes more of a business exhibiting the interest of the owner/developer and their clientele and less of a space that serves the community at large where people are provided with places to exercise their human rights. Oftentimes this leaves spaces that cater to the minority upper class and foster a sense of exclusivity instead of inclusivity. This notion feeds into the realities of racism and discrimination that have plagued American cities for years. Properly designed public space can bring a city together fostering a sense of belonging and creating moments for people to come together aiding the need to desegregate American cities.

How does architecture relate to a city’s identity?

Architecture influences the culture of a city by shaping and revealing its values through tangible design. The individual architectural elements, the forms, and gestures of space provide psychological and sociological cues that manifest the everyday culture of a society. The symbiotic relationship between architecture and society informs spaces, events, and interactions that are either positive, negative, or indifferent to the growth of a city’s culture. For instance, the city of Chicago has an extensive public landscape that comes to life in a variety of ways throughout the year attracting people from all walks of life. However, the city is also referred to as one of the most segregated cities in America. Where does this disconnect lie? Developments that intend to provide valuable or positive spaces are in fact indifferent to the actual growth of Chicago culture. The research highlighted in Architectural Expressions: The Language of Public Space analyzes the current public landscape and the human behavioral patterns resulting from that landscape. In an effort to aid
designers, developers, architects, and municipalities to be more aware of their designs and teach them how to cultivate richer interior public spaces this project looks to decrypt the language of the city.