We spent nine full days in the galleries installing all the works in the show. What an intense, exciting, fruitful, and exhausting time it was! On the first Saturday, everyone was bright-eyed and buzzing. Artists and their friends and families were carrying, unloading, building, and tweaking artworks, while the crew and our team were busily providing support. Over the next few days, as the candy at the GCA table became increasingly vital, more and more art slowly filled the space and brought new life to the galleries. What was especially exciting for me was that I was able to see our imagined exhibition become a reality. Our visual for the show was no longer a map on a flat white bulletin board with blue, green, and orange colored post-its. It was transforming into something we could physically experience.

This shift from our imaginations and our printed floor plans to the actual walls, rooms, floors, ceilings, and corners was pivotal. To paraphrase Jean-Paul Sartre from his essay The Irreal Object, objects in our imagination are not the same as in our realities. Thus, as we finally saw each work in the particular space we had allotted it, we really began to realize how different objects could work together and speak to each other depending on how they were placed within an area. We also discovered some sneaky architectural features that seemed less apparent when the gallery was empty. The slight angling of a floor work or the distance between paintings was really a conversation between the curators, artists, and the space.

The following photos are a selection from the exhibition installation. Only now can I see that as much as some of these photos appear to be focused on artists in action or creative energies flowing, they also show artists engaging with their spaces. Molly Pattison is basking in the warm light by the window, using it to add the finishing touches to her structures, and giving us a preview of how her work now hangs and glows in the afternoon light. Noel Madison Fetting-Smith similarly is feeling rays of sun on him provoking him to wear sunglasses inside. The rays also touch the metal desk legs in his work and the heat they capture unexpectedly gives them new meaning as it conflicts with his invitation to touch and activate the wood stump. Keeley Haftner and Bobby Gonzalez both create works directly on the gallery walls that continue to intervene with the surrounding space. Risa Hricovsky engages the entrance’s corner walls by creating new angular movements with her vinyl that contrast the wall’s edges. CD Wu’s neon lights can be seen from a great distance, but he continues his Godzilla drama around a corner suspending the narrative until we get close enough to see the perpendicular wall. Carolina Faller Moura uses the length of her wall to impose a gap between her various layers of audio and text that explore the mistranslations between languages. And Linda Tegg brings the outside inside with her varieties of plants. 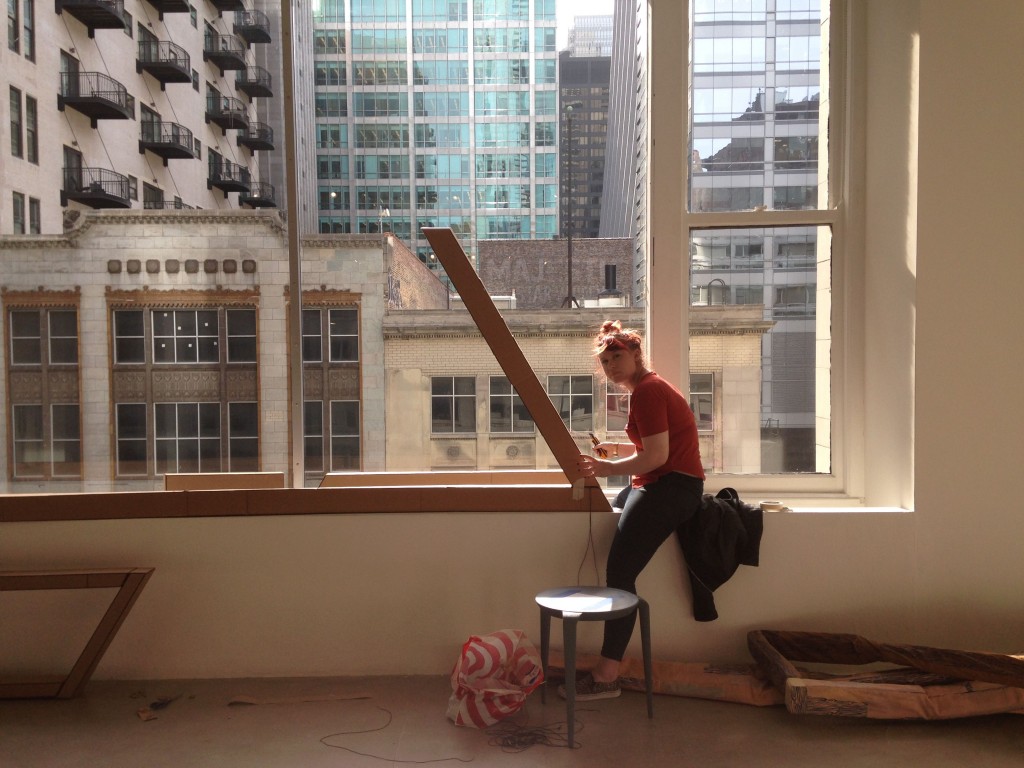 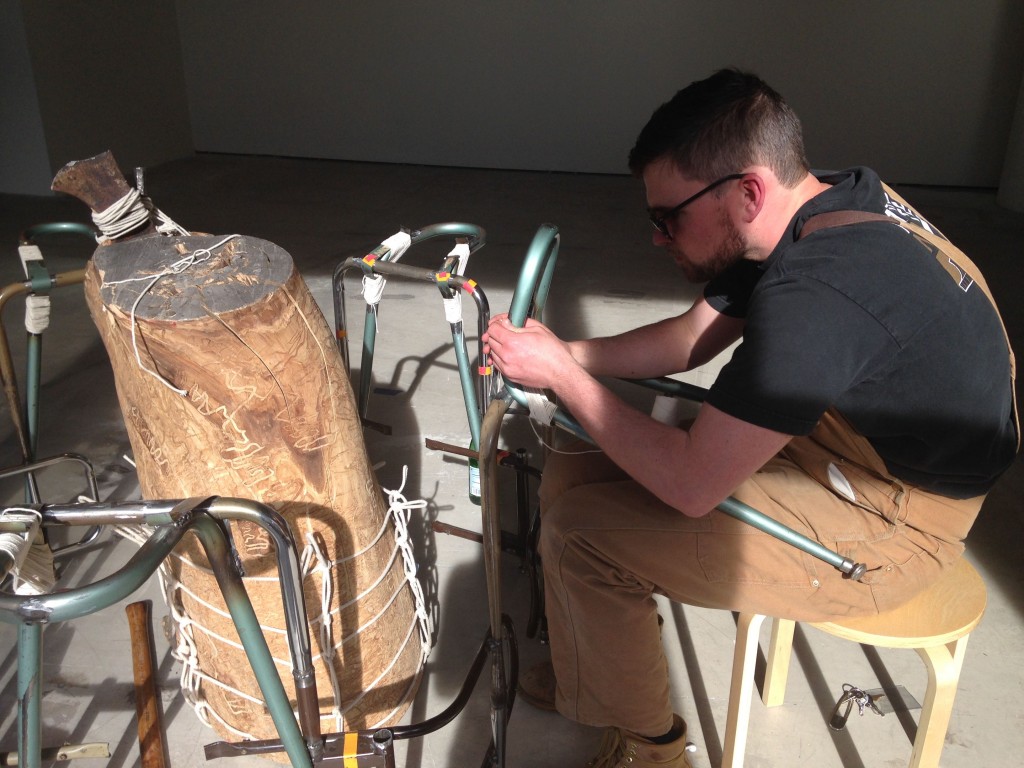 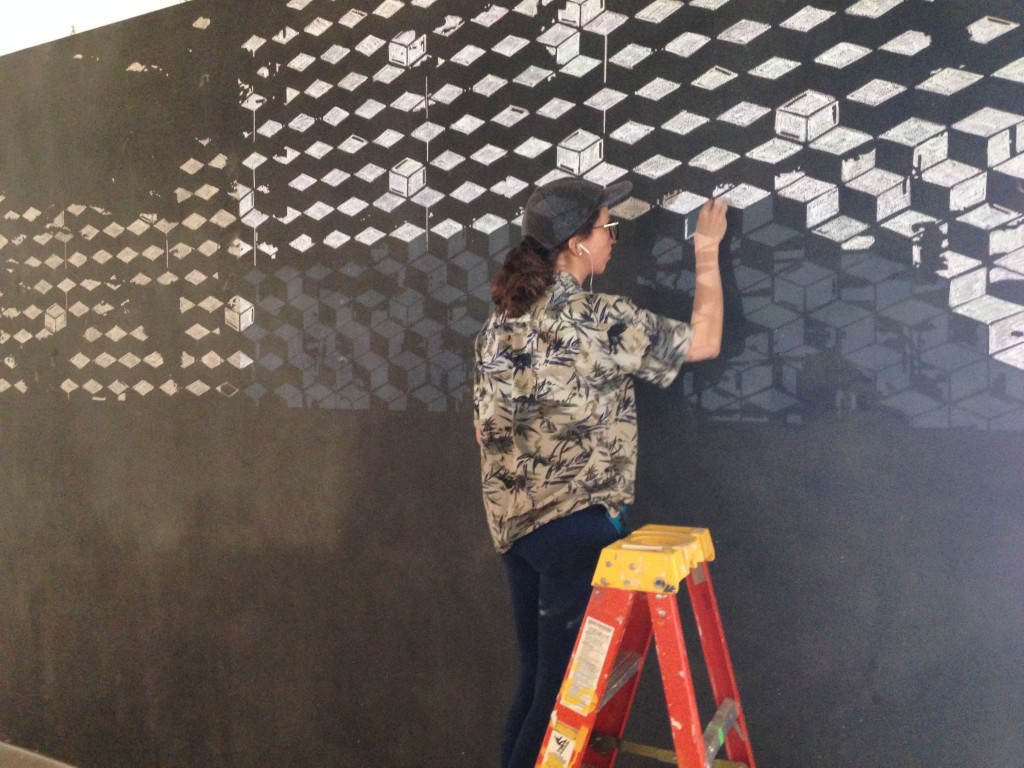 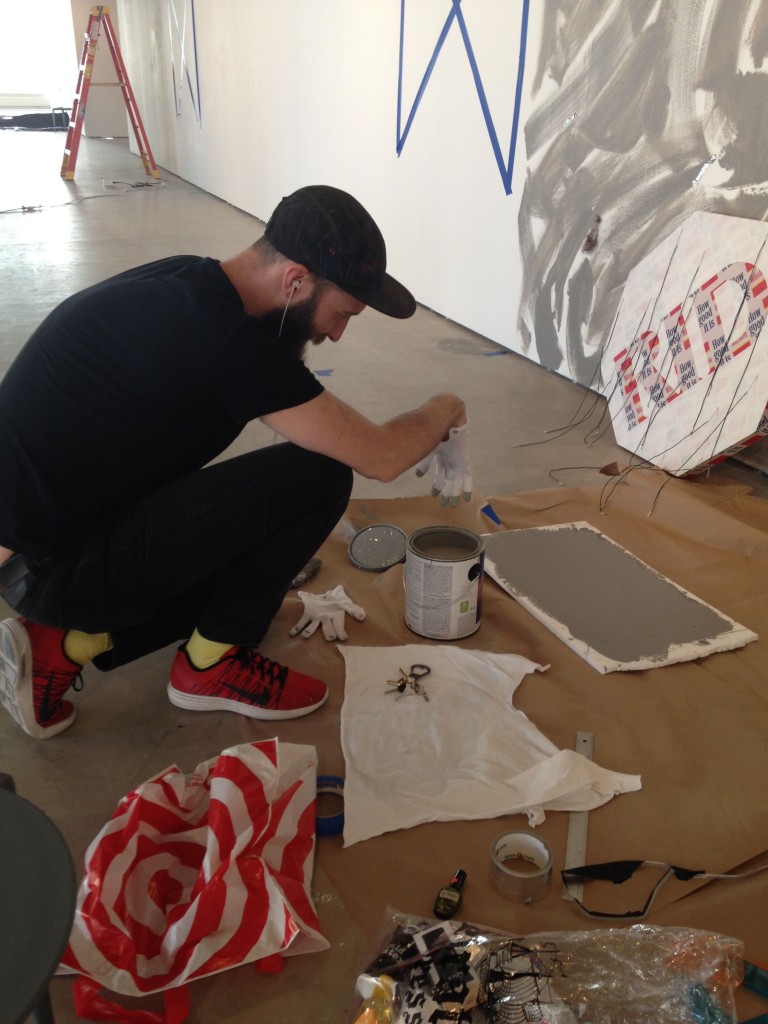 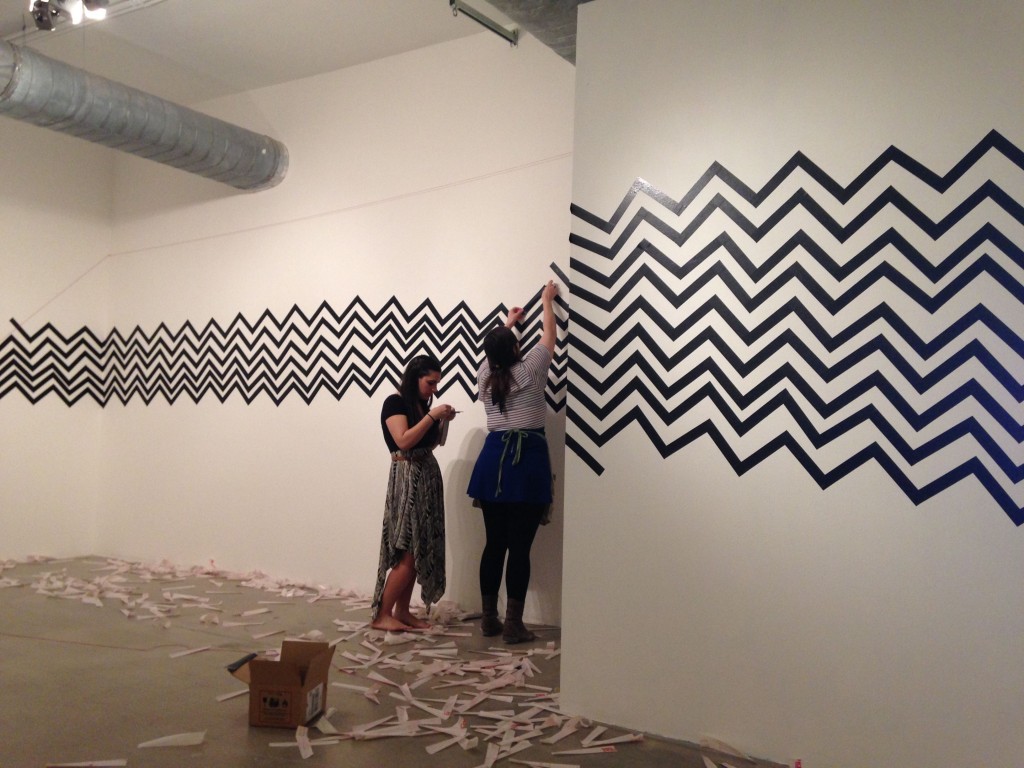 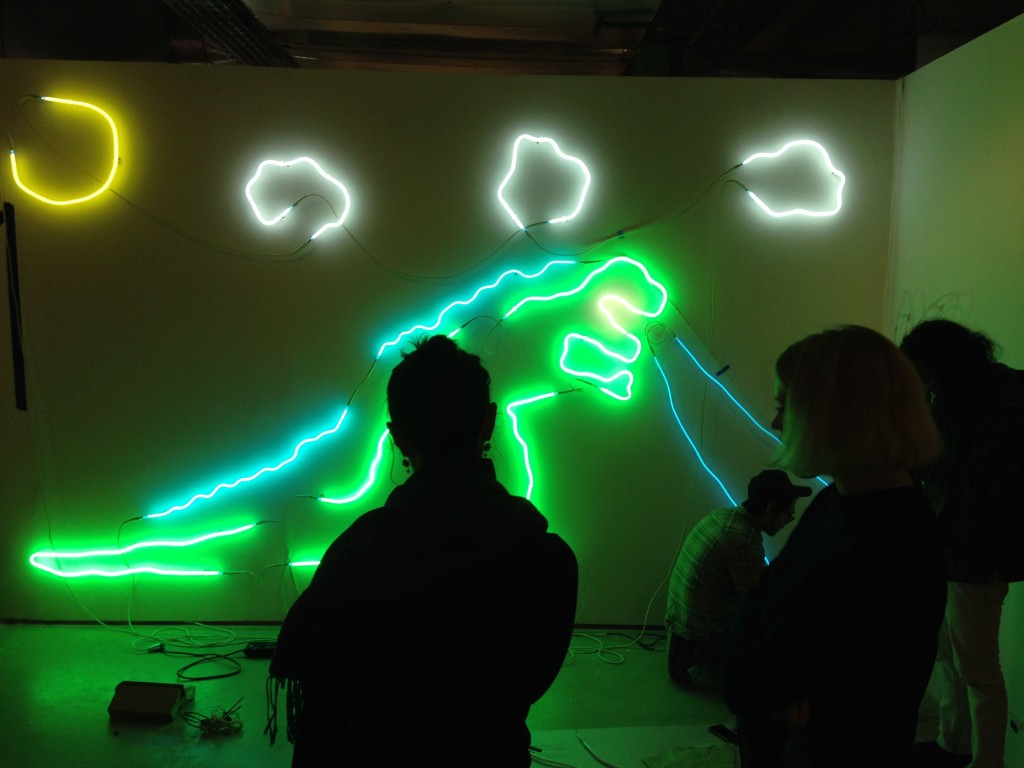 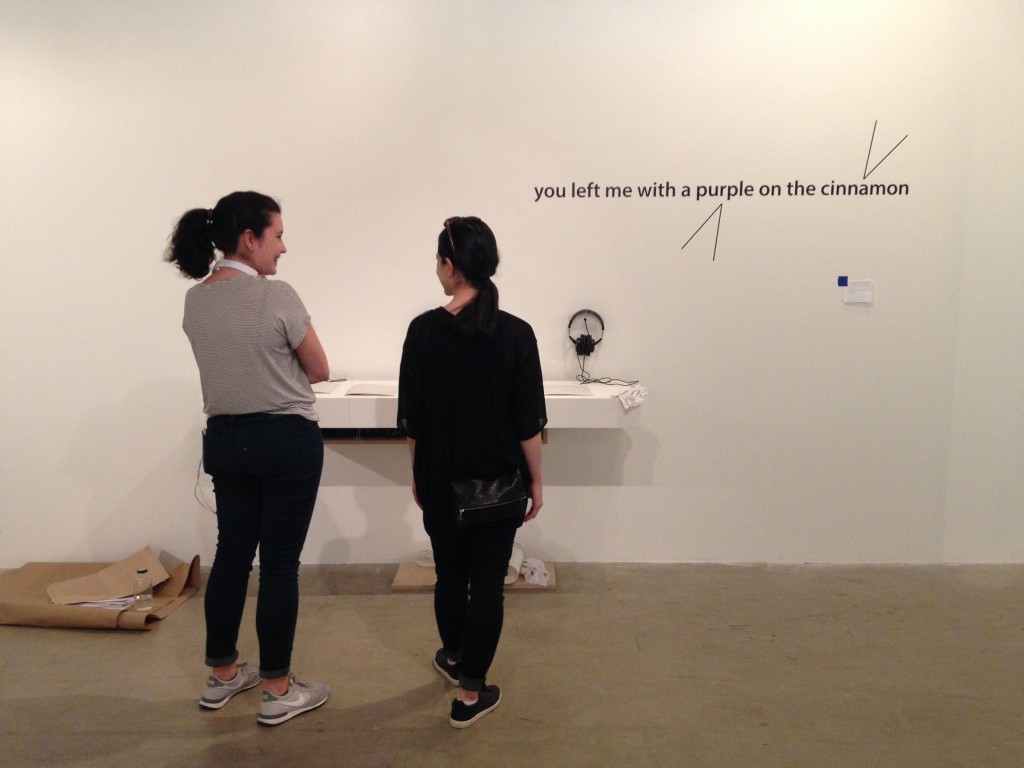 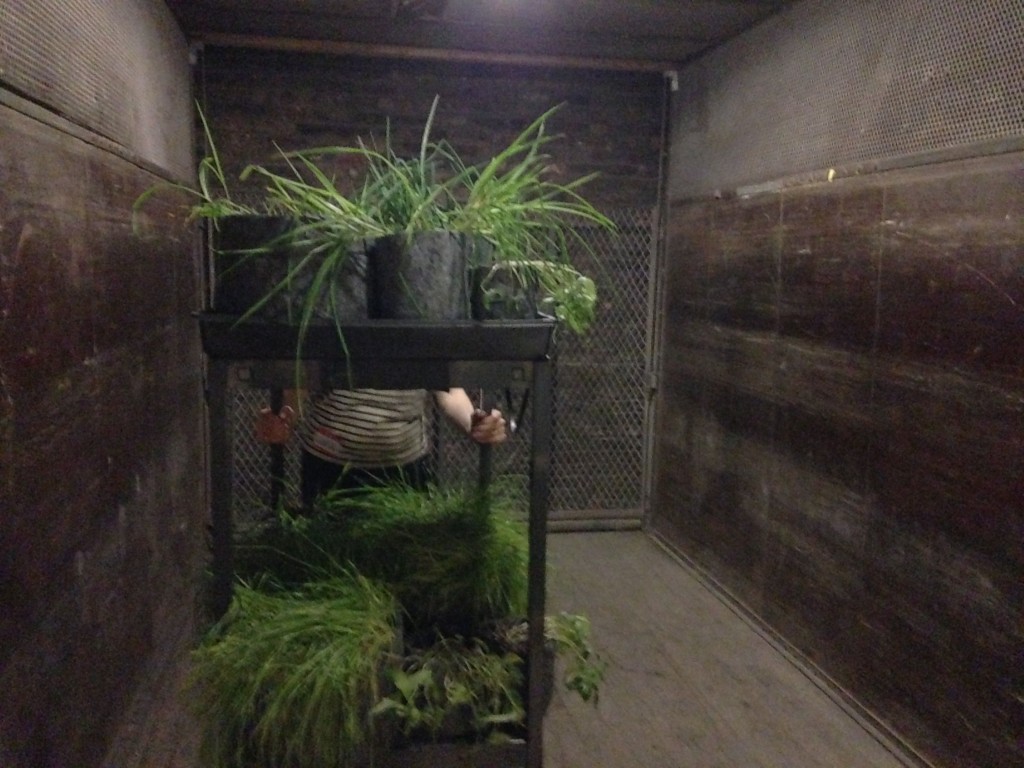