LG: I’d like to use this opportunity to do a little tracing of your practice, how your ideas have developed into your work for the MFA Show, as well as talk about our MFA/GCA relationship as part of this process. We first met at your studio in November of 2015. You had signed up to participate the Studio Visit Program, which I was running at the time through the Art History department. What was that initial visit like for 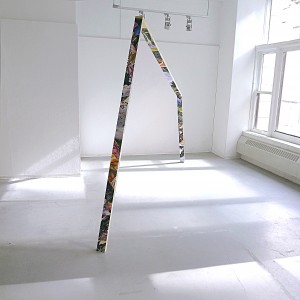 CH: It was great to have my peers in Art History give feedback. I remember you had an energy that I responded to and it was pretty intimate, just four of us, which was nice. I didn’t end up showing any of the pieces you guys saw! I usually need a lot of space around a thing to work it through. I tend to lead with the hand, first making and translating between different types of media both material and immaterial, and then thinking of the objective systems that incorporate them… So having a small visit where I could talk about the work was good.

LG: We talked a lot about your works that incorporated desert iconography and your geological experiences. Moreover, we bonded over Andrea Zittel, as you had worked at AZ West and I wrote my SAIC entry essay for grad school on her. We talked a lot about the utopian/dystopian and manifestations of material explorations, design, and architecture. Are there traces of the desert in your current practice?

CH: I’d like to think there are traces of the desert in everybody’s practice. It’s that place that seems alien and uncanny in its beauty—speaking a completely foreign language to the one we know but still, somehow, resonating an intuitive sound in us that we recognize as part of our own. I mostly grew up in a very quiet household with a devoutly Buddhist mom who made her own soap, grew her own food etc., but also in a highly urban area of Taiwan, full of concrete and noise. So the desert was always something I craved, it was a horizontal infinity of space and sound, my home interior materialized while also contrasting with the density and noise of the vertical infinity that shaped my outside environment. Concrete became really fascinating to me as the urban industrial vertical endpoint of a chain that started in horizontal landscapes of sedimented limestone.

So I think of the desert as translating between systems: the ‘industrial’ and the ‘natural’, the physical localization of the phenomenal process of how I came to learn my body’s limits. What is scale? How big is a rock that I can I reasonably climb without hurting myself (not so big)? How infinite a line of sight can my eyes bear in the notion of a horizon? How much sun can I withstand before I’m like, oh man I’m so thirsty I don’t even know what is water anymore? Andrea was pretty influential in that regard, paring down the essentials of what we need or don’t need and asking what it really means to be free.

LG: Speaking of what’s happening now in the studio, we’ve talked a lot about outside/inside, translation, and humor and play. What are you currently thinking about in terms of content for your MFA Show work?

CH: Initially, I wanted to mic a rock and amplify its potential to make noise, and recreate it as two-by-four structure with concrete. It collapses two things I love: the desert and the rhythm of rock and roll. In essence the drum is the first things we hear as a human, before we see, before we smell or taste, we feel the rhythm of our mother’s heartbeat. As the work has progressed I’ve moved away from the heaviness of concrete as a metaphor for seeing ourselves in a landscape and towards gradations of light, color, noise, and pattern.

As part of the MFA Show, I’m laser cutting records and the machine translations of the sounds are so off sometimes it’s funny. You end up hearing the kerf of the laser, you hear the materiality of sound as the needle scratching the plastic and its gradation into the immaterial data you’ve imprinted underneath. I’m leaning into this kind of absurd dissonance. I started out as a weaver and in all my jacquard weavings I generated my own draft patterns out of noise to simulate traditional brocade weaves. The weave draft is extremely similar to a graphic score visually, so I‘m interested in subjectively moving between these two systems and having a structure that can potentially be a draft and a score, simultaneously weavable and playable and amplifying that structure-as-translation.

LG: What is your process like when considering the presentation of your work in the MFA Show? Do you anticipate the space, and the nature of a group show, impacting your installation?

CH: Yes of course. I haven’t seen my space yet, but I definitely anticipate, like many of us, the space having a big impact. The piece has a three-part structure: object-transcription, performance-duration, object-translation. 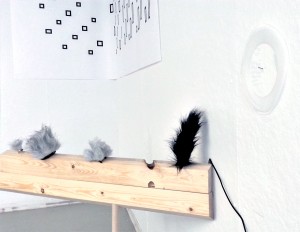 LG: Your use of materials is quite varied, as you’re not just creating physical objects but also using elements of sound, recording, and performance. What’s it like for you to perform in the space with the objects, perhaps as your own object?

CH: Hmmm, I don’t have words yet for this, but it’s as equally a feeling as a concept.

LG: and you’re going to perform at the opening and closing of the MFA show?

LG: Great! Thanks so much! Is there anything else you’d like to add?

CH: It’s been amazing getting to know you through this process! 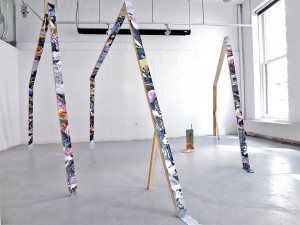